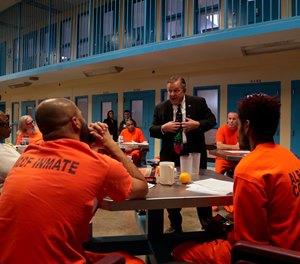 The inmate yelled out in the deepest voice he could come up with. I was searching his cell and he was sitting in the day room playing cards some 20 feet away. I paused for a second before I continued, then quietly laughed at myself for considering if I was invading someone’s private space. This was exactly what the inmate wanted, to make me uncomfortable doing my job. I had to remind myself that this was my house.

DON’T BE A GUEST

Inmates are tuned in to the level of ownership you feel for the correctional facility you are tasked with running. If they see you feel like a guest in a housing unit, they will take advantage of your discomfort and cultivate a separation between you and your duties.

Inmates also pay close attention to the level of ownership you take when you enforce facility rules. If you hesitate while correcting behavior in a housing unit, inmates will test your level of commitment by not responding the first time you give them orders.

When you walk into a housing unit and inmates are standing around in the day room, do you address them first, or do they address you first? When you walk into that housing unit, do you feel you are walking into their living space, or is this your housing unit? If you enter a cell and an inmate half jokingly demands a warrant, what’s your response? How quickly do you make it clear that the inmate is a guest in a jail cell owned by the taxpayers?

If you don’t feel like you’re walking into your own domain when entering a housing unit, you’ll have to fake it until you deal with any anxieties connected with entering socially hostile spaces.

Pretend you’re walking into the place you feel most socially comfortable, but don’t confuse comfort with relaxation. As you know, you should never be so comfortable in a correctional setting that you become relaxed and complacent.

There is a social advantage to addressing others before they address you when you walk into a new space. As the initiator of any social interaction, you get to set the tone of the conversation. By asking the first question, you place the respondent in a socially defensive position, as they must fill the social cue to answer the question. As you walk into a housing unit, a simple “How are you?” or “Who’s winning the game?” can set that tone.

Pay attention to where you fit in during a social interaction the next time someone initiates a conversation with you. If they ask you a question and you respond, are you in a position of social offense or social defense? If you answer the question and follow up with a question for the initiator, are you now more even on the social scale?

Social hierarchy is often defined on a microcosmic level by who is asking the questions and who is answering them. This can be seen more plainly in news interviews and criminal investigations, or when a teen comes home and dad asks, “How was school today?” In initiating a conversation, you become the owner of that conversation. When you do so in a correctional setting, you shore up your ownership of any housing unit you walk into, adding to your level of authority.

OWN YOUR JOB DUTIES

Ownership in a correctional setting goes beyond conversations between staff members and inmates. When chain of command and unity play an integral part of effecting staff control of a facility, it is important that corrections staff members take ownership when enforcing facility rules.

Command staff periodically see enforcement of a rule fall short or stop completely. They will task shift supervisors with renewed efforts to get the facility back on track. When directives are handed down the chain of command to reinforce rules, inmates count on the housing officers to hesitate in their enforcement efforts.

There is a marked difference between telling the inmates in a housing unit that the sergeant wants all cell property put away in lockers and telling the inmates that you want all cell property put away in lockers. Inmates know very well where changes in enforcement come from, but that doesn’t stop them from testing your commitment to that enforcement. When you take full ownership of your duties, regardless of where the order originated, you will curb that inmate testing.

As a classification officer, I was ordered by the classification sergeant to move an inmate from one housing unit to another. He had received information from a shift supervisor that prompted the move. I stood at the inmate’s door and told him to roll up his belongings and be ready to move. The inmate asked me who made the decision. I told him my supervisor made the decision and he didn’t have a choice. The inmate demanded to speak with the classification sergeant before he moved.

This scenario could have gone much differently had I taken ownership of the command. Inmates don’t need to know at what level decisions are made. I learned to lead with full ownership of an order in future incidents. The answer to whose decision it is to execute an order falls directly on the staff member giving the order to an inmate. You tell the inmate, “I’m moving you to another housing unit.” When they ask who made the decision, you can simply say, “This is my decision.” You’re not lying. You have decided to follow orders to move this inmate to another housing unit.

You can always point inmates to your facility’s appeal process. In the end, the inmate may have an opportunity to plead his case with your supervisor, but not because he demands to talk to the sergeant in order to follow your direct orders.

Another tactic inmates use when challenging your commitment to enforcement is fishing for your opinion on the rule you are enforcing. You can prevent this by stating you are not employed to like or dislike rules. Inmates will ask your opinions in many situations. If you want to engage in an opinion conversation for the sake of comedic relief of institutional tension, you can always change a fact into an opinion. For example, “It is my opinion you will get a write up if you don’t lock down for count,” or, “It is my strong opinion that it may rain tomorrow.”

THIS IS YOUR HOUSE

Staff ownership of a correctional facility and its rules will lead to fewer challenges from the inmate population and less time spent negotiating with difficult inmates. It will also reduce the opportunity for inmates to find weak links in the chain of command. Maintaining that ownership as a matter of operational baseline creates an environment where staff works more effectively while dealing with difficult inmates and new institutional rules.