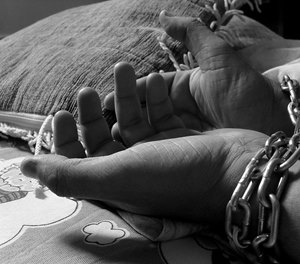 In the search for effective interdiction practices, prisons and jails are a largely untapped resource

Human trafficking is believed to be the third largest criminal activity in the world. As the extent of human trafficking increases, so must strategies for detection and prevention. In the search for effective interdiction practices, prisons and jails are a largely untapped resource in the fight against human trafficking in the United States.

Victims within the sex trafficking category may be forced into outside sex solicitation, providing escort services, or sexual services within illicit massage businesses. According to some estimates, 80 percent of human trafficking activity involves some form of sexual exploitation.

When many people hear the term “human trafficking” they invariably think of sex trafficking. Labor trafficking, however, is a common problem within the United States with 19 percent of trafficking involving labor exploitation.

Labor traffickers may initially lure victims with promises of employment before exploiting them to where victims find themselves a part of permanent involuntary servitude.

The methods used by traffickers to manipulate victims may depend on certain victim characteristics including, but not limited to, homelessness, poverty, age, or chemical dependence.

While there are some differences in the dynamics within each of the categories, both labor and sex traffickers tend to gain control of their victims through any combination of force, fraud, or coercion. Additionally, perpetrators seek to identify vulnerable victims and exploit those vulnerabilities to achieve control. Minors or those suffering from previous victimization may be particularly vulnerable.

HOW CORRECTIONS CAN IMPACT HUMAN TRAFFICKING

There are four steps corrections officials can take to become a valuable resource in the fight against human trafficking:

In many cases, a victim of trafficking may initially present as a suspect in some type of crime. The crime itself may be the initial indicator of the possibility of trafficking. For example, a suspect who has been arrested for prostitution may be a victim who has been forced into committing the crime.

It’s important to note that, unlike the crime of prostitution where a person voluntarily enters into the practice of exchanging money for sex acts, a person who is coerced into the behavior through force or threats of force is not a prostitute but a victim of sex trafficking.

An individual who has been arrested on what appears to be an immigration violation may be a victim of labor trafficking.

Corrections staff may be among the first to interact with potential trafficking victims as they are processed into facilities as suspects. These individuals may not initially appear to be a typical crime victim familiar to law enforcement, which is why it is important for officers to understand the dynamics of trafficking and trafficking behaviors, as well as victim characteristics.

Corrections officers, particularly those working in the jail environment, provide a vital tool in the screening for and identification of potential evidence of human trafficking.

As jail staff process a new arrival’s property at intake, they may come across indicators of trafficking, which can include:

Telephone calls can reveal the same type of relationships as found in the letters. The phone calls could also be revealing in regard to the tone and manner in which parties communicate.

By themselves these items do not indicate a human trafficking situation, however, when put together with other variables they may indicate the likelihood of trafficking.

The type of trafficking suspected can dictate the agency to be notified. Certain agencies may be more equipped to deal with certain cases than others. For example, immigration enforcement may be more equipped to investigate a suspected labor trafficking victim than the local police department. This emphasizes the importance of corrections facilities establishing relationships with the local, state and federal law enforcement agencies that service your area.

In addition, some of those individuals who have been victims of trafficking can also have trauma-related effects due to their victimization. Victim advocates or victim resources should be a standard component of an agency’s response as we look to focus on trauma-informed care in corrections and law enforcement.

4. Create a level of awareness

As human trafficking activity increases, corrections staff need to become more involved in the identification and investigation of cases. As with any crime trend, this includes facilities providing the training and information necessary to be effective.

Staff should understand the dynamics of trafficking, as well as the characteristics associated with perpetrators, victims and evidence of the crime taking place.

Creating awareness goes beyond educating staff. An effort should be made to educate potential victims as well. Victims need to first understand they are in fact victims, and that law enforcement is here to help. The level of manipulation may be so great that victims may not even realize they are caught in human trafficking.

Corrections is a vital component of the criminal justice system. The role of corrections has grown over the decades from simply housing prisoners to rehabilitation efforts and servicing those with mental illness. This role continues to expand, and corrections may now also play an integral part in the enforcement of human trafficking.

The screening mechanisms that are in place within correctional facilities, as well as the ability of corrections staff to search and monitor those within their custody, are valuable crime-fighting tools. It is up to corrections officials to first educate themselves about human trafficking and to provide necessary training and information to their staff. Then, it is equally important for corrections and law enforcement to develop relationships and combine resources to combat the far-reaching impact of human trafficking crimes within the United States.

Rusty is a law enforcement instructor. He began his career in 1997 working as a correctional officer at a men’s medium security prison. While working in the prison, he also served as K-9 sergeant, lieutenant and captain. He was a member of the Correctional Emergency Response Team for 15 years and holds current law enforcement instructor certifications in defensive tactics, chemical agents and firearms. In 2013 he became a full-time academy instructor where he instructs courses in several topics within the field of corrections and law enforcement. Rusty received his Bachelor’s degree in Criminal Justice Administration from Bellevue University and completed graduate work at Fort Hayes State University. Rusty can be contacted by email.